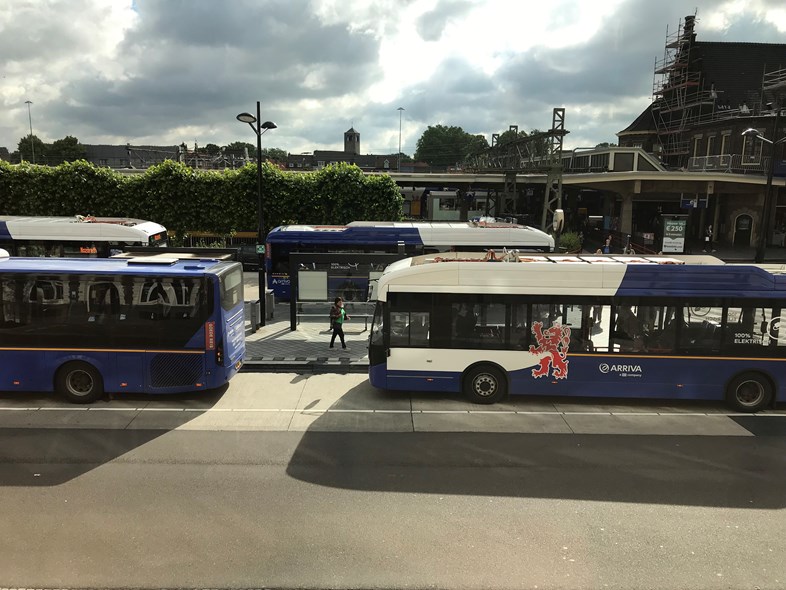 [London, Friday 2 August] Arriva, a leading public transport provider operating services across Europe, has reached the halfway point in its rollout of electric buses in Limburg, the Netherlands. The significant milestone supports the province’s plan for public transport to go emission-free by 2026 and reflects Arriva’s ambition to reduce its carbon footprint across Europe.

Manfred Rudhart, Arriva CEO, said:  "Arriva is committed to reduce carbon emissions, both by encouraging more people to use public transport and by minimising our own environmental impact. By working closely with government and partners, we’re introducing cleaner, quieter and more comfortable vehicles to our fleet across Europe in support of the climate change agenda and the transition to net zero emissions.”

The EU Clean Vehicles Directive introduces binding targets for the procurement of publicly run buses over the course of the next decade. Arriva is working closely with Public Transport Authorities across Europe to support them in meeting targets to tackle climate change.

Arriva is one of the first public transport companies in the Netherlands to operate electric buses on a large scale. 55 new electric buses have recently commenced service bringing the total electric fleet in the province up to 95, nearly half of Arriva’s 200 strong bus fleet in Limburg.

Elsewhere in the Netherlands, Arriva has introduced 23 new electric buses to the historic city of Leiden, where Arriva holds the concession to operate bus services.

Arriva is working with partners across Europe to introduce greener transport. From January 2020, Arriva will introduce fully electric water taxi services in Copenhagen harbour, supporting the municipality’s aim to be the first CO2 neutral city in the world by 2025.

The introduction of new vehicles reflects Arriva’s ambition to deliver the quality and value for money transport solutions we need as part of a zero-emission future for public transport in the UK and Continental Europe.

Arriva is one of the leading providers of passenger transport in Europe, employing around 53,000 people and delivering around 2 billion passenger journeys across 14 European countries each year.

In the Netherlands, Arriva provides transport services in the provinces of Drenthe, Flevoland, Friesland, Gelderland, Groningen, Limburg, Noord-Brabant, Overijssel and Zuid-Holland and has around 5,500 employees. In addition to train and bus transport, Arriva, together with Koninklijke Doeksen, operates the Waterbus in South Holland and is active in the Dutch touring sector under the name Arriva Touring.

Arriva started operating the concession to operate public transport services in Limburg in November 2016, as part of a 15-year £1.7 billion deal to deliver significant improvements for customers. Limburg is the southernmost of the Netherlands’ 12 provinces. In addition to bordering Belgium, and the Dutch Brabant and Gelderland provinces, it shares a border with Germany.