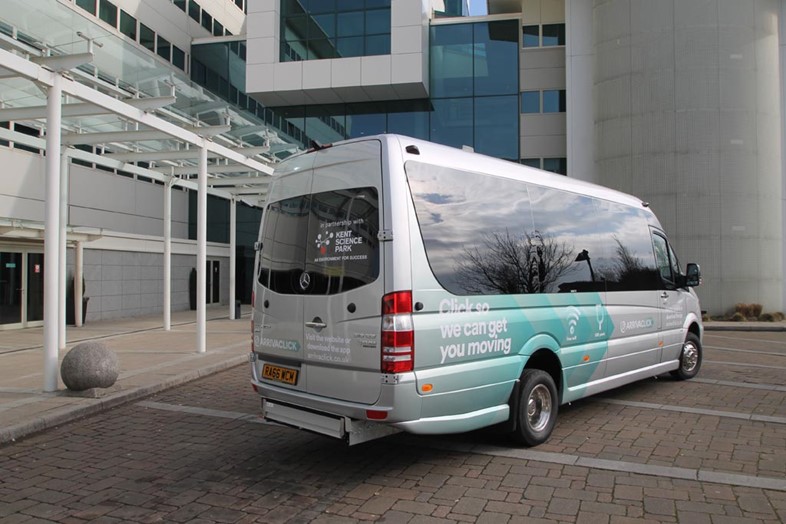 Arriva, a leading pan-European passenger transport provider, has completed its first year operating ArrivaClick – a fully demand-responsive public transport service. This new dynamic service was piloted in and around Kent Science Park and Sittingbourne – an area under-served by local public transport connections – with discussions now underway to roll the scheme out to a major city in the north of England.

ArrivaClick sits between a taxi and local bus service. Customers pre-book using a smart phone app, reserve a seat and get a guaranteed fare and an estimated arrival time at a chosen pick-up point. Their journey is then matched with others heading to the same or similar location, with clever backend technology calculating the shortest and fastest route for all customers on-board instead of following a fixed route. The service is also personalised, with customers receiving text messages providing arrival time and the name of their driver.

The luxury, comfort and convenience of the ArrivaClick service, with free Wi-Fi, charging points and leather seats, is designed to make public transport more attractive to encourage people out of their cars, in turn helping to reduce air pollution and congestion in urban areas. Through the course of the pilot, more that 50% of customers have switched from using private car to ArrivaClick.

The flexible, on-demand service, which has catered for a wide range of journey types – from daily commuting to nights out – has been rated highly by customers for its convenience, value for money and the politeness of its customer-focused drivers.

This has been borne out by recent survey data, indicating high customer satisfaction with the new service as customers switch to a more flexible mode of transport.[1] Successes include:

“Demand Responsive Transport models, like ArrivaClick, present an exciting opportunity to meet the changing needs and requirements of customers and to offer a real alternative to current modes of transport. They have the potential to provide reliable and affordable first and last mile transport options and vital local transport links in underserved areas.  With our plans to expand this award-winning service to other locations in the UK, we are excited about its future and the benefits it can bring to other towns and cities

“Through the successful ArrivaClick pilot in Kent we have also seen some really interesting and important behaviour change, with people ditching private car use to commute to work or visit friends and family in favour of this new customer-led public transport service.

“By integrating this new flexible, on-demand service with bus and train networks we can continue to play our role as passenger transport providers in helping to ease congestion and improve air quality in urban areas.”

Passengers can download the ArrivaClick app via the iOS or Android app stores.

Arriva is one of the largest providers of passenger transport in Europe, employing over 60,000 people and delivering more than 2.2 billion passenger journeys every year.