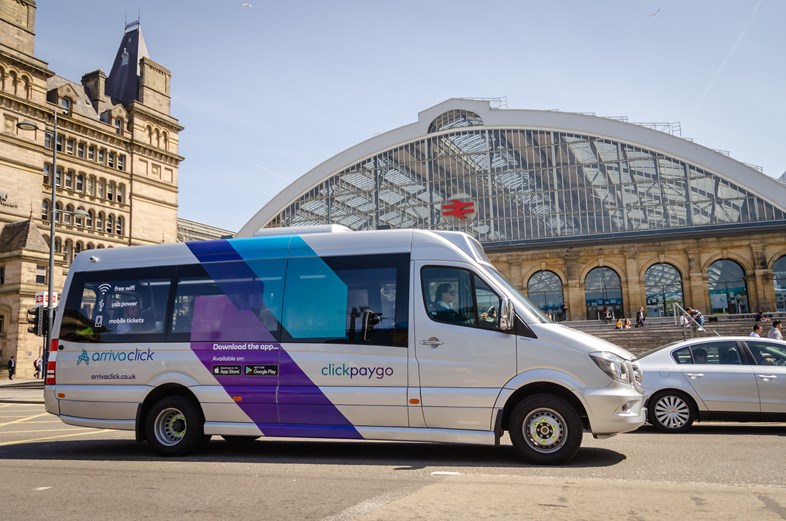 [London, Thursday 12 September 2019] A survey of nearly 1,400 ArrivaClick customers in Merseyside has found the service is encouraging more people to use public transport with 40 percent of customers switching to ArrivaClick from single use cars and taxis, helping to support a shift to more sustainable travel. One year into operation, the number of app downloads in Merseyside is now up to 27,000, growing by 1,000 every week.

A separate ArrivaClick service, which has been in operation in Leicestershire for three months, is showing similar positive trends with 5,000 people having downloaded the app so far, growing by 700 each week.

Asiya Jelani, Business Development Director for Demand Responsive Transport (DRT) in the UK, said: “People want more convenient and flexible ways to travel. These figures show that DRT has an important role to play in getting more people out of private cars and taxis, and onto public transport. We’re in conversations with a number of partners on where we might introduce ArrivaClick next.”

Earlier this year, Arriva signed a five-year contract to connect New Lubbesthorpe, a significant new housing development in the East Midlands, with Leicester. The service is exceeding passenger growth forecasts with 3,500 journey requests being made each week.

Section 106 funding is being used to pump-prime the model in New Lubbesthorpe. By reducing the need for private transport for residents moving on to the development, Arriva is creating a long term sustainable public transport option for residents.

ArrivaClick’s Merseyside operation is celebrating its first birthday and with demand for the service continuing to grow, it has recently expanded its fleet to 25 vehicles. On average, 7,500 journey requests are being made each week and it has a 4.9 out of 5 rating on the app.

In addition, a local authority funded ArrivaClick service has been introduced in Speke in Merseyside. This is the first time public funding has been used to fund a digitally enabled DRT service in the UK.

Asiya Jelani, Business Development Director for Demand Responsive Transport (DRT) in the UK, continued: “We believe the ArrivaClick model has an important role to play in blending publicly and privately funded bus services together. The ArrivaClick model offers greater flexibility than a linear bus service and can cover a wider operating area with competitive operating costs. It can play a key role in connecting harder to reach areas with core public transport networks.”

The survey of customers in Merseyside was conducted earlier this year and found that 9 out of 10 customers would use the service again and would recommend it to their family and friends.

The survey in Liverpool was undertaken by Arriva UK Bus in February 2019, with 1370 respondents taking part.

ArrivaClick is an intelligent minibus service that responds to demand. It offers the convenience of a taxi with the cost effectiveness of a private vehicle, providing a corner to corner service that takes passengers where they want, when they want. Customers travel in style with free Wi-Fi, charging points, tables and leather seats making it ideal for commuters and visitors.

ArrivaClick was launched as a pilot in Sittingbourne, Kent, in 2017. Services have been extended to Liverpool in Summer 2018 and to Leicester in the Spring of 2019. You can find out more about ArrivaClick on the Arriva UK Bus website.

From Monday 2 September a 12-month trial will begin in Speke in Merseyside to look at how demand responsive transport can help to complement the existing public transport network. You can find out more on the Merseytravel website.

Arriva is one of the leading providers of passenger transport in Europe, employing around 53,000 people and delivering around 2 billion passenger journeys across 14 European countries each year.

You can find out more about Arriva’s achievements on the Arriva in Focus website.