Routemaster wedding car is just the ticket for love on the buses couple! 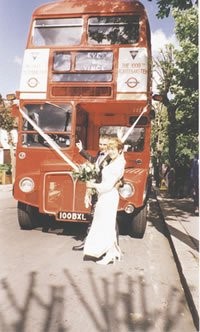 When Eve and Vince Clarke decided to get married last year theydecided to use an alternative transport to get the bride andbridesmaids to the church - a Routemaster bus!

There is method in this madness though, as both Eve and Vincework for Arriva London and met whilst working together at Croydongarage. Vince is a bus driver and he caught Eve's eye as she sawhim smiling at her from his cab. That initial contact turned todating and now, some two years later, the couple continue to beblissfully happy in their married state.

The following photograph is available via e-mail: