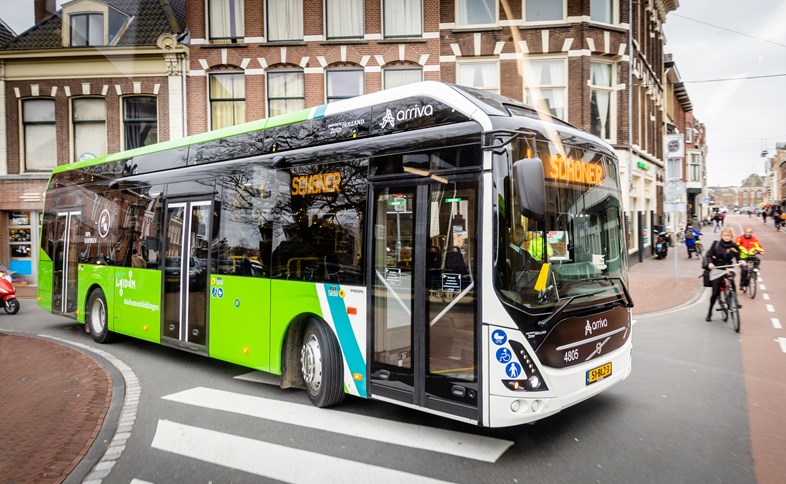 [London, 5 November] Nearly one in three electric buses in the Netherlands are now operated by Arriva, making it the second largest electric fleet operator in the country. Since 2012, Arriva has introduced 157 electric buses across the Netherlands, including Den Bosch, the Wadden Islands, Leiden and Limburg.

Figures from the Dutch transport consultancy, CROW-KpVV, show a rapid increase in the number of electric vehicles in the Netherlands over the past year, a trend which is partly attributable to the electrification of Arriva’s bus fleet in the province of Limburg.

Liz Benison, Managing Director for Mainland Europe, said: “Tackling climate change is one of the biggest issues facing society right now. We’re working closely with our clients and customers in the Netherlands to address this by being a market leader in developing the green bus solutions of the future.”

Arriva Netherlands is reducing its environmental footprint in other ways too. Arriva’s ‘Samen voor Groen’ initiative, launched in 2018, has led to the planting of over 15,500 trees, with more to come. Half of these trees have been planted in the Netherlands, with the other half planted in tropical climates where they grow faster, and therefore absorb more CO2.

Anne Hettinga, Managing Director for Arriva Netherlands, said: “Travelling by public transport is of course a green option in itself. We’re playing our part in helping the environment by introducing more zero emission vehicles. Our ‘Samen voor Groen’ initiative goes a step further by helping to offset carbon emissions.”

Preparations are also underway for a green transformation of Arriva’s ‘Northern lines’ rail operations in the north of country. A new €1.6bn contract, commencing in December 2020, will include the rollout of the world’s first zero emission trains that are suitable for use on both electrified and non-electrified tracks.

18 new trains will be introduced that use environmentally friendly biodiesel on partially electrified track. The new trains will rely on a process involving Hydrotreated Vegetable Oil (HVO), which produces Green Diesel: a cleaner alternative to conventional diesel. In addition, 51 existing trains will be fitted with advanced battery packs that can store energy and power the trains for when they stop at stations.

CROW-KpVV conducted an analysis of the rollout of electric buses in the Netherlands. Just over 10% of Arriva Netherland’s entire bus fleet is now fully electric, above the national average.

In September this year, Arriva completed the rollout of 23 zero-emission buses in Leiden. Over the summer, Arriva reached the halfway point in its rollout of electric buses in Limburg.

Arriva’s ‘Northern lines’ contract spans the Dutch provinces of Fryslân and Groningen. Some parts of the network also extend to Lower Saxony in Germany. Arriva secured the tender to continue to operate the concession in the summer of 2017.